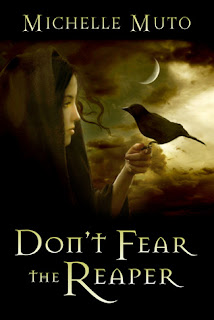 Summary:
Grief-stricken by the murder of her twin, Keely Morrison is convinced suicide is her ticket to eternal peace and a chance to reunite with her sister. When Keely succeeds in taking her own life, she discovers death isn’t at all what she expected. Instead, she’s trapped in a netherworld on Earth and her only hope for reconnecting with her sister and navigating the afterlife is a bounty-hunting reaper and a sardonic, possibly unscrupulous, demon. But when the demon offers Keely her greatest temptation—revenge on her sister’s murderer—she must uncover his motives and determine who she can trust. Because, as Keely soon learns, both reaper and demon are keeping secrets and she fears the worst is true—that her every decision will change how, and with whom, she spends eternity.

My Thoughts:
This was a very well crafted, written, and executed story. I really, really, really liked it! Has got to be one of my faves this year so far.

You have characters that are real, three-dimensional, and distinctive. The book opens with Keely's death. Her response to her own death is so believable, you actually think it's real. Like maybe the author followed Keely into the afterlife and wrote down her reactions.

Loved the bounty-hunter reaper, his name is Banning. He has that mysterious touch, silent and strong and you're not quite sure what motivates him. I found myself having an internal debate on whether he wanted to help Keely or trap her somehow.

And the sardonic, possibly unscrupulous demon? Daniel? His voice is so strong and yeah, he's a *likeable* demon. Whether or not he's unscrupulous is up to the reader to find out. But hint: he's a *demon* kiddos.

I loved the tension and interaction between the characters. I thought the pacing was excellent. Keely's motivation throughout was clear, and she pretty much stuck to her guns. I'm a little disappointed that we didn't learn of Daniel's past...why he is what he is and what his motivations were. And was the ending a tad predictable? Perhaps a little. These 2 reasons are why this didn't earn a full 5 stars, but there one or 2 things that did catch me by surprise, and all the little trails wound around the story and tied together in the end.

A very enjoyable ride.
Posted by Unknown at 7:24 AM