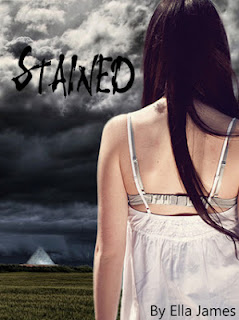 17 year-old Julia is devastated when an explosion takes the lives of her adoptive parents. Closing in on the age of 18, she doesn't want to go back to foster care. That thought, coupled with the fact that she sees the angel of death hovering over her burning house, she runs. It;s a good thing, too, because this bad-ass demon wants to kill her. And she runs into a dark and mysterious stranger that questions her about her birthmark (stain).

This is an action-packed, paranormal romance that has great characters, *terrific* prose, and a suspenseful plot that hasn't quite unfolded its wings in this story.

Julia is likeable enough; she seems typical in a teenager fashion, despite the slightly off-kilter life of a foster kid. Cayne is dark, handsome and mysterious. He's extremely tight-lipped, partially because he doesn't trust Julia, and partially because he's lost his memory. Seeing Cayne struggle to come to terms with himself and his past will make even the most detached reader empathetic.

Ella James has a gift for prose. In fact, I'd say her prose is one of the best I've seen in a long time.

The plot is fluid and changing as the couple barrel across the country looking for clues and answers about why demons want to kill Julia.

What didn't totally cut it for me? The dialogue isn't nearly as stellar as the prose. There were many mundane conversations that took place that didn't have a point. This, personally, bothers me. Also, about three quarters of the way through, the story completely stalled. I think there was almost 2 chapters devoted to a vision that, in the end, served no purpose that I could tell. And then a little too much time taken for the couple to 're-unite' after a falling out. Lastly, we were never told what the stain means...and I think this something we should have learned in the first book, since it is called Stained, after all.

Will I keep reading to find out what happens next? Absolutely. This was a very good read in the YA paranormal genre.
Posted by Unknown at 8:08 PM