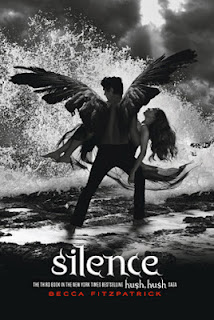 In book 3 of the Hush, Hush series, Nora is out of it, and Patch makes sacrifices (as usual). But they need to work together to take down the bad-ass. It's sort of like starting over for them, because Nora can't remember anything...which sucks when someone's trying to kill you.

This is another great installment, and the plot thickens in the continuing saga. The story picks up where #2 leaves off, but we are not left scrambling to remember what occurred before, as the author nicely weaves in the information from previous books that we need to continue on. We have twists and turns, and see some familiar faces...though we don't see as much of Vee in this book as I'd like, because she is a great character!

I wanted to strangle Nora at times, especially when she comes across as a selfish, spoiled little brat. She redeems herself in the end, but as usual, Nora's attitude knocks a star off my rating. She's like a polar opposite of Patch, who would (and does) sacrifice everything for Nora.

The series continues to rock, however, and I highly recommend it.
Posted by Unknown at 9:01 PM