Cover Reveal! Whispers on the Wind

Check out the beautiful cover of Whispers on the Wind: Ari's Story (#1) by author Alison Davis! 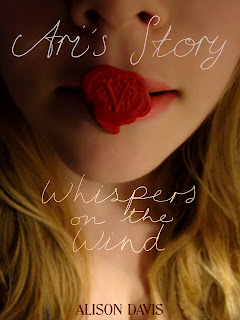 Synopsis:
Haunted by the echoes of the past, Ari's finds love, sees death and saves one man from repeating his ancestors’ mistakes and takes it upon herself to catch him when he falls.

Ari moves to a small English coastal town and takes a job at the local library, she begins to fall in love and become embraced in the community.

Meanwhile under her house through a bomb-shelter under the cellar she discovers a natural cavern in the cliff face. The cavern contains a wealth of treasures and trinkets left behind by those who found it before her.

A wedding photograph and a set of letters become her obsession.

Ari does her best to uncover their stories, only to discover that history is repeating itself, every male descendant of Alexander has died on that cliff top since and now a new set of letters have appeared with the same seal and the same warning signs.
Exerpt:

I stood in the cavern and looked about with a candle. I’d only been down in the hidden grotto a few times and hadn’t ever ventured beyond the first pillar. Even now I still didn’t go any further than that. There was no need; so many hidden treasures were right by the steps. I set the candle in the closest corner as always, and within its range I scanned the treasures. There were tiny figurines carved from wood set in some of the alcoves. They become mere silhouettes right on the edge of the pool of light cast by the flickering flame. Some small tin toy cars from the 1950’s were stationed into traffic queues, with a fire engine parked up by the pillar and a small police officer with his hand held up to the nonexistent drivers. There were more relics in the ‘garden’ above, some magazines from the 1970’s rotting in a corner, next to the bench. Even older relics were scattered about too, hair ribbons, earrings and even a photograph of a wedding from the early 1900’s.

On the back of it someone had penned a note.

My darling husband,
You were mine for one short hour before you were taken to the battlefields.
I waited. I wrote to you. For so long I waited to hear from you, a note, or a letter. Then I waited for a telegram. For the news you were not returning to me. Then I just waited.
My family moved away. I stayed and waited for news. But it never came. Without you the world is grey, my heart is still, and day blurs into night. I feel as if I am Lot’s wife -with all the tears I have cried I shall surely turn to salt.
You never returned to me my love and so I shall come searching for you

The handwriting had deteriorated gradually throughout the note and the ink was smudged, tears had stained the words. I had placed it on a ledge of a rocky alcove last time I was down in the cavern to stop the damp ruining it too much; but now I reached out and slipped the picture into my bag as the candle light began to dim and the flame died.

Alison has been writing from an early age, stories, poems, novels, prose. After a 3 year sabbatical from writing she returned to her passion to write Whispers on the Wind: Ari's Story.

And this beautiful creature is Alison, who looks busy at work: 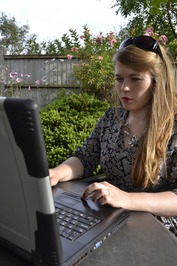