In the Hot Seat! with author Tom Sarega

Author Tom Sarega is taking a turn on the hot seat today! Tom is the author of a young adult dark fantasy, Dreamcatchers - After Darkness Light.

And you are in for a real treat today. Tom has recently revealed his new cover, which is pretty cool. Let Tom know what you think! 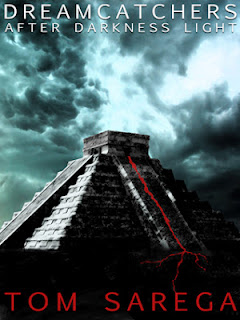 And the love doesn't stop there, my friends. Dreamcatchers - After Darkness Light is FREE on Amazon from 9/19 through 9/21, so hurry to Amazon and get your copy (see deets at the bottom of this post).

I know this sounds like a cool read, and I'm very much looking forward to reading this myself!
Now, we'll get to the hot seat.

The Mayan prophecies are nigh and the immortal Anunaki, a murderous
Mayan warrior, will fulfill them. He will unleash the dreamcatcher and
shroud the world in such darkness that none will survive. And if by a
miracle some do, they will pray every night that they had perished
also.

The only person who can stop him is his younger brother, Iktaniki, a
spirit guide - but not without the help of the five. There’s just one
problem. They don’t trust him....or his motives.

Dale: Where do you get your inspiration to write?
Tom: Interesting question Dale – well, I was into writing from a young age.
I wrote stories from about the age of ten but stopped when I started
my marketing career. However, I have always held onto one source of
inspiration and I remember it now every time I sit down to write. At
school one day, at about the age of fifteen or so, I was asked to stay
behind after class. My teacher asked me if the piece I had just
written for homework was autobiographical, so immersive were the
scenarios I had created. That has always inspired me to write.

Dale: What's the first book you read that made you catch your breath?
Tom: So many stories have moved me in so many different ways. I wouldn’t
say “catch my breath” but The Lion, The Witch and the Wardrobe by CS
Lewis was the first book to entrance me with its magic. I would say
that Rosemary’s Baby by Ira Levin was the first story to really scare
me and Farewell to Arms, by Ernest Hemingway, was the first book to
make me cry, so invested was I in his characters and their fates.

Dale: If you had a super-power, what would it be?
Tom: Another interesting question! Well it just so happens that in
Dreamcatchers, the five school friends have “dreaming abilities” in
their dreamworld - just like superpowers. My favourite would be
Ronnie’s ability, to “see” into the past through another person's
memories. Watch this space for Book Two though - it’s not only the
past that he can see into…….

Dale: If your book was to become a movie, what would the theme song be?
Tom: It would have to be "Run" - by Leona Lewis, for no other good reason
than I just love the song!

Dale: When you write, are you a plotter or a pantser?
Tom: I do find that if I sketch a plot outline then the story hangs
together but I do let the characters lead me as I write. I think it
allows for more believable characters.

Dale: When did you first realize that you wanted to become a writer?
Tom: I think I was about eight when my uncle asked me “what do you want to
be when you grow up?” Of course, I replied “an author”. I even wrote a
series of short stories called “The Adventures of Alex the Ant” that I
submitted to Walker Books but unfortunately I did not hear back from
them.

Dale: Do you listen to music when you write? If so, what music do you listen to?
Tom: No I don’t. I find that I have to write either in complete silence or
in a place where there is a constant hum of noise. I wrote
Dreamcatchers at the Christchurch University Library in Canterbury (in
England) and at Café Rouge along Canterbury High Street.

Dale: What process do you use to create your worlds?
Tom: Research, research and more research. I read a number of books about
Mesoamercian (Mayan, Toltec, Aztec etc) cultures and I studied their
wars, their weapons and their mythology in order to link the story of
the five schoolchildren and the Mayan prophecies together. In the real
world, dreamcatchers are from a separate culture to Mayan history.
However, as this is a fictional story, and as the dreamcatcher is so
important as a metaphor for something very relevant to today's world,
I found it enticing to base the story around it - I think it works
very well.

Dale: What inspired The Dreamcatchers series?
Tom: The idea for Dreamcatchers originally came to me in 2001. I was
searching on the internet for a Portuguese art shop named Destarte,
back in the days when the internet was nothing but a mass of blue
links.

I accidentally clicked a link to a website about dreamcatchers. On
that website there was a quote by Thoreau –
“Go confidently in the direction of your dreams! Live the life you’ve
imagined.”

And then it hit me – what if you actually could travel through your
dreams? What if you were actually there? And the basic idea for
Dreamcatchers was born. Have a look – I think the website is still
there.

Dale: Hot seat questions:
a. Beach or mountains?
Beach! If I went up a mountain I’d probably never make it back!

b. Summer or winter?
Definitely summer. I’m British don’t you know? We hardly ever have summers!

c. White or dark chocolate?
Both of course!

d. Coffee or tea?
100% coffee. I live on the stuff. Hot Java Lava coffee is my favourite.

(Dale: Me too! Love that show!)
f. Favorite color?
Blue

j. Morning person or night owl?
Night owl – most of the time, when I was struggling to resolve plot
issues in the story, I would fall asleep and I would dream how it
should happen. More often that not, my subconscious wrote
Dreamcatchers!

Thank you Tom, for sitting in the hot seat and giving us view of your world!

So, pretties, now that you know a little bit about Tom, I have to show you how you can get your hot little hands on his excellent book, Dreamcatchers - After Darkness Light.

I read Dreamcatchers. Loved it!! I taught middle grade for over 30 years, and trust me, they'll love it too.