Today I'm featuring author Louise Wise. She doesn't write just chick lit, she writes dark chik lit. Come on, that has to appeal to some of you pretties! (Dale stands, waves) 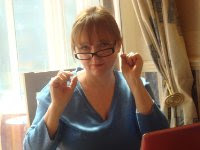 Louise Wise lives in England with her husband and four children - all boys. So is it any wonder she took to writing fiction and blogging? Her habit has reduced her to living in a small room at the back of the house, tapping out romantic fiction on her pink (something had to be pink!) laptop and spotlighting/interviewing other authors on her blog.

She emerges for coffee at regular intervals during the day, and slopes off to Real Work at a busy pharmacy several days a week which helps pay for her addiction to writing.

She rarely washes. And doesn't like to be disturbed. But she'll make allowances if you come bearing gifts of vodka and chocolate.

Louise's latest? The Fall of the Misanthrope: I bitch, therefore I am. (Now *that's* a title!)

Valerie Anthrope learned, from a young age, to hold tight to her emotions. Her days are spent keeping people at arm's length, but while she has conceded her nights will be forever haunted by disturbing dreams her life isn't prepared for the bubbly and assertive Ellen, who believes she's been put on this earth to help everyone she encounters. Ellen introduces Valerie to the sexy, but equally upbeat, playboy Lex Kendal.

Valerie's not interested. Lex is and pursues Valerie. Then Valerie's dreams become more sinister until, finally, she learns why. A modern Cinderella with Valerie's emotions playing the ugly sisters, Ellen enacting the fairy godmother, Lex Kendal playing a flirty Prince Charming and instead of a glass slipper, furry Boots. Can Lex win her before her dreams, AKA midnight, strike?