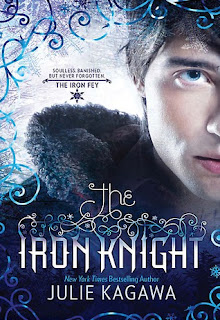 Initial Thoughts: Hated the cover! It ruined it for me.

Summary (from Goodreads):
"My name--my True Name--is Ashallayn' darkmyr Tallyn. I am the last remaining son of Mab, Queen of the Unseelie Court. And I am dead to her. My fall began, as many stories do, with a girl..."To cold faery prince Ash, love was a weakness for mortals and fools. His own love had died a horrible death, killing any gentler feelings the Winter prince might have had. Or so he thought.

Then Meghan Chase--a half human, half fey slip of a girl--smashed through his barricades, binding him to her irrevocably with his oath to be her knight. And when all of Faery nearly fell to the Iron fey, she severed their bond to save his life. Meghan is now the Iron Queen, ruler of a realm where no Winter or Summer fey can survive.

With the unwelcome company of his archrival, Summer Court prankster Puck, and the infuriating cait sith Grimalkin, Ash begins a journey he is bound to see through to its end--a quest to find a way to honor his vow to stand by Meghan's side.

To survive in the Iron Realm, Ash must have a soul and a mortal body. But the tests he must face to earn these things are impossible. And along the way Ash learns something that changes everything. A truth that challenges his darkest beliefs and shows him that, sometimes, it takes more than courage to make the ultimate sacrifice.

My Thoughts:
OK, so I hate the cover. This is book 4 in the Iron Fey series, and I have always loved Ash. I've been team Ash all the way. I've had 3 books to develop the perfect Ash-image...and this cover totally failed. It kinda ruined it for me, you know? So every time I went to open the book, there was that blasted cover full-in-the-face over-powering *my* fantasy Ash! That blows!

So that's how it started.

I found the first 1/3 of the book moving rather slowly. I just wasn't caught up in it, and I can't really say for sure if that was the cover talking, or whether it was truly the plot. Maybe it was just all set-up. There's a few flash-backs as well, because someone from the past is resurrected. Contrived? Maybe. It seems perhaps a new love triangle was being forced.

Once we get to the 2nd half of the book, the pace picks up. I loved the whole gauntlet section, where Ash has to go through these trials. We really get a look into his past and see an Ash who we can't like...quite frankly, Ash was a dick in his younger days. But he's foxy, so I forgive him. And he's learned to become a better man, so there's always that, of course.

I do like the way the novel/series wrapped up. The ending makes up for the beginning, and overall, I really enjoyed it.