In the Hot Seat with author Chrystalla Thoma 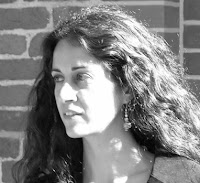 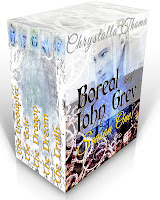 Chrystalla is Greek Cypriot (hence the strange name) and likes writing about bratty, angsty boys and spunky girls in fantasy and science-fiction worlds. She writes mainly for a young adult public but not only (heed the warnings!)

She's currently preparing a non-fiction book about dragons, because the truth must out, and is juggling two series ("Elei's Chronicles" and "Boreal and John Grey").

And now that you know a little about amazing Chrystalla, let's get her on the hot seat!

1. Tell us a little about your latest release.

Boreal and John Grey (complete season 1)
During the 13th century In Iceland, epic poems and tales called Edda spoke of the aelfar – the elves. Tall and pale – their name means ‘white’ – these trickster beings brought misfortune and illness, and exchanged healthy children with sickly changelings.

Now the Gates are opening once more between worlds and the elves are back.

Ella Benson, Paranormal Bureau agent, fights all that comes through the Veil – dangerous Shades crossing into our world. But increasingly dangerous creatures are slipping into her city, her work partner has just gone missing, and a mysterious – and, frankly, quite hot — guy saves her life. His name is Finn and, as it turns out, he’s a natural when it comes to fighting the Shades.

When after centuries of peace the Gates between the worlds start opening and our old enemies, the elves, make a comeback, Ella needs a new, temporary partner. Enlisting the mysterious Finn is a no-brainer, until she realizes he is guarding dangerous secrets of his own.

Together with Finn, and the fate of the world on her shoulders, what’s Ella to do but grab her weapons and figure it all out, one way or another.

2. OK, now tell us something about your heroes that we *don't* know...something that's not in the books.

Ella loves carrot cake and hates chicken. Something to do with a chick she kept as a child. She started learning yoga once, to find inner peace, but couldn’t stand it, it choked her. Since then she’s taken up kickboxing because it allows her to let out some of her anger. (Dale: I can relate!)

Finn... is a mystery. Can’t tell you more, you must wait until season 2!

3. Where did you get your inspiration to write the Boreal and John Grey?
I love elves. So I went back to Tolkien’s sources, the old Icelandic epic poems and tales called “Edda” and realized the aelfar (the elves) weren’t as nice and peaceful as he presented them to be. The elves were said to have magic, and sometimes they were mentioned in the same breath as the aesir (the gods), but they were also wicked tricksters who brought misfortune and illness, and exchanged healthy children with sickly changelings.

They were obviously playing with us, not too long ago, observing us and experimenting with us. Why? Well, in my opinion, it’s because they were planning on coming back for more...

4. What's the first book you read that made you catch your breath?
Neverending Story, by Michael Ende, and then The Lord of the Rings by Tolkien. Awesome books.

5. If you had a super-power, what would it be?
Speak Japanese. Honestly. Always wanted to learn and found it too hard. It’s a super power to me!

6. When you write, are you a plotter or a pantser?
Mixture of both. I make outlines but then I let the story take me places I hadn’t imagined...

7. When did you first realize that you wanted to become a writer?
As I recall, I was around 11 when I declared my intentions. ;)

9. What's the most insane thing you've ever tried to do?
Write in English (cause my native language is Greek). I do have a degree in English literature, so it’s not like I didn’t know the language, but it took all my courage to start. Now I can’t seem to stop! :D

Read the complete First Season of the series Boreal and John Grey, books 1-5 (The Encounter, The Gate, The Dragon, The Dream and The Truth) at a special price with an Author’s Note at the end.

Where to find the complete season 1 boxset:

The goblin crouched down and drew its huge fist back. Time slowed. She saw it coming at her like a dark wave, about to smash her face.


And here are some other places you can connect with Chrystalla: