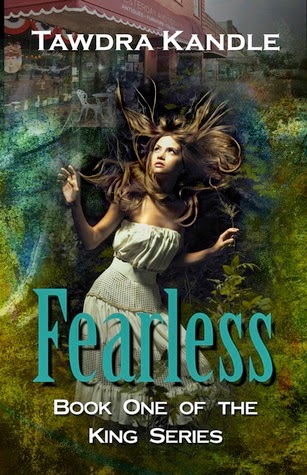 Summary:
Tasmyn Vaughn didn't expect much when her dad's job moved them to a small town in Florida; it was just another new school. But there is more to King than meets the eye, and soon Tasmyn's ability to hear others' thoughts is the least of her worries. Entangled in a web of first love, quirky and secretive townsfolk, magic and blood rituals, she discovers the town's secrets aren't just bizarre, they're deadly.

My Thoughts:
I really toyed with my rating. On the one hand, the story moved well, the characters were well drawn, and it was pretty well written. On the other hand: I hate insta-love. It's just not believable in my book, unless the author makes it believable, i.e., give me a reason to believe it. In this case, it didn't work for me. But for those of you who believe in love at first sight with no cosmic explanation...go right ahead and disagree with my thoughts and rating, cuz you'll love this book!

So, like I said, this book was actually well-laid out, the plot moved fairly well (though started extremely slow...I'm all for the slow build-up, but sometimes things gotta move along, ya know what I'm sayin'?), and things were very descriptive. You saw, felt, smelled, got all the senses going.

Tasmyn is like-able, and her growth is what's to be expected from a teenage girl with over-protective parental units. I like how she took control over her life in the end. Atta girl! Loved the bitches, I could just picture those mean girls raging through the high school halls. The science teacher was deliciously mysterious and creepy.

Michael, her insta-love connection, is a nice guy, works hard, struggles sometimes in school with some subjects (which I liked, no one can be too perfect, otherwise - gag!). Another well-drawn character.

Here's my problem. Everything was insta-good. Tasmyn and Michael? Insta-love. Tasmyn and his parents? Insta-love. The good things here were that her parents weren't so quick to jump on the love caboose with Michael, and his sister wasn't down with the whole gee-she-can-read-your-thoughts-but-don't-worry-she-works-real-hard-to-not-listen-but-hey!-no-promises-there sitch. Good for her. Can't have everything be too easy! LOL

Other minor annoyances:
1. If her parents are so freaking over-protective, the first, and I mean FIRST, thing they'd do is buy her a cell phone so they can connect any time. Not buying the fact that she didn't have one.
2. The set-up at the end was obviously a set-up. But Michael had his phone turned off...who does that? No teenager I know, so this was an obvious hurdle the author threw in to get us to the main event.
3. There's something going on with the insta-love connection, since it seems to be a family trait on Michael's side. I would have bought this whole thing if there was something behind that, and maybe there is, but it's never touched on.
4. The wrap-up was kinda quick.

Overall, the book was good, just a little too many coincidences and obvious in the plotting phases.