For all the animal lovers out there....

I could walk barefoot around the yard in safety.

My house could be carpeted instead of tiled and
laminated.

All flat surfaces, clothing, furniture, and cars would
be hair-free.

When the doorbell rings, my home wouldn't sound
like a kennel.

When the doorbell rings, I could get to the door without
wading through all the fuzzy bodies who beat me there.

I could sit on the couch and my bed any way I wanted,
without having to take into consideration how much
space several fur bodies need to get comfortable.

I would have enough money, and no guilt, to go on
a real vacation.

I would not be on a first-name basis with 6 veterinarians,
as I put their yet unborn grandkids through college.

My house would not be cordoned off into zones with baby gates and makeshift barriers.

My house would not look like a day care center, with toys everywhere.

My pockets would not contain things like poop bags, treats
and an extra leash.

I would not look strangely at people who think having
ONE dog/cat ties them down too much.

I'd look forward to spring and the rainy season instead
of dreading them as 'mud' season.
Posted by Unknown at 8:50 AM No comments: 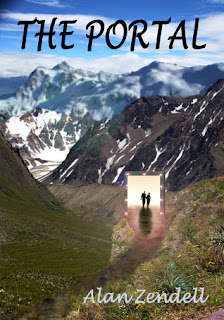 Summary (from Goodreads):
Harry Middleton is born in an America staggered by a century of decline, a time of medical and technological marvels beyond the reach of most people in a shattered economy. Pessimism and despair are more common than optimism and hope, and a desperate government bets the future on space. The lunar and Martian colonies have not provided the hoped-for salvation, so despite an angry, disillusioned public, the first star mission will soon be launched.

Harry is a special child, smart, precocious, his only confidante an embittered grandfather. When the old man dies, Harry is lost, until he meets Lorrie. At thirteen, they bond, certain they’ll spend their lives together, but a year later, she disappears, and Harry is desolate.

With help from his friend Carlos, Harry begins a quest to find her, but he quickly learns how powerless he is. Even the police lack the resources to help. Harry and Carlos can only depend on themselves and each other. An unlikely duo, Harry is an academic prodigy while Carlos is a stud athlete. Realizing that school and baseball are their tickets out of the morass they’re caught in, they inspire each other to greatness in both.

Trying to move on with his life, Harry has a college sweetheart, but as long as Lorrie haunts him, he knows the relationship is doomed. He gains celebrity and wealth, but the thing Harry wants most, finding and saving Lorrie from whatever fate took her from him remains beyond his reach. And always, in the background, are the deteriorating state of the country and the coming star missions.

And of course, there's the Portal.

My thoughts:
This is an intriguing and well-written book spanning the life of Harry, from adolescence to old age. The future world that Mr. Zendell has built is believable and well-thought out. The characters are engaging, real, life-like. You follow Harry on his journey through life, the ups and downs, and get caught up in his ride. This is a novel that I would describe as character-driven rather than plot-driven, and while I typically don't get into character-driven novels, I was quite enthralled with this one. A character's life has to be *really* interesting to hold up in a character-driven novel, and Harry's was pretty interesting.

Was there some slow parts? Yeah, here and there. Especially toward the end when there is a lot of politicizing in the story, because this is a path Harry, as a character, takes later in his life. To me, the role Harry plays in the politics of the nation was a bit of a soap-box, though we do know that in real life people listen and heed stars' (whether film or athlete) political views. And some of those stars do use their celebrity status as a platform.

I was expecting more of a science fiction concept, but the star missions, and *especially* the portal, are far in the background. I admit I found that a little disappointing.I still consider this a good read overall, and recommend it.
Posted by Unknown at 6:42 PM No comments: 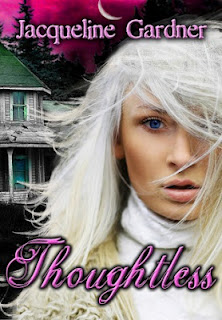 Summary (from Goodreads):
When Bridget finds a dead cheerleader in the janitor’s closet, she becomes the killer’s next target. High school just got worse. It’s bad enough that she can hear the shocking truths that pass through her classmate’s heads. Now she has to worry about staying alive, and all clues point to the one person whose thoughts she can’t read - her boyfriend Terrence. Someone is taunting her, threatening to expose her secret. And when Bridget tries to single out her blackmailer, she’s nearly beaten to death by a mind controlled minion with fiery eyes.

But when Bridget finally comes face-to-face with the killer, suddenly a horde of brainwashed students programmed to destroy her life doesn’t seem so bad.

My thoughts:
First, I really like this cover, and the premise grabbed me immediately. Poor Bridget has an onslaught of thoughts running through her head, and they're not hers. It's especially hard in high school with aaalllll those hormonal boys with really only *one* thought on their minds. Hard to have a boyfriend. The plot was good for the most part...though I don't think I fully bought the reason Bridget felt like she couldn't tell anyone she'd found the dead cheerleader. Though Bridget works hard at keeping her mind-reading power a secret, to me that wasn't reason enough she had to hide...but of course I'm not a 17 year-old girl who just found a dead body. Maybe the right instinct is to run.

Bridget gains the aid and trust another student, and there's always her best friend, whom I'm happy to say both stick with her through the bad stuff that comes. Boyfriend Terrence is the stuff high school dreams are made of...um, a.ka. yummy.

Here's what brings down the star rating. Basically, the writing itself. In short summary:

2. There was a lot of telling. ...looking shocked. ... looked confused. ... I found myself getting nervous. ... Rory was nervously waiting. The thing is, sometimes these types of phrases were paired with action. The action itself was showing how the character felt...the statement of how the character felt is redundant.

4. A bit of passive writing. I felt his hand grab my ankle. I could hear the sirens. Passive writing makes the reader feel like he/she is reading a story, rather than being immersed in the story.

This one was just okay for me.
Posted by Unknown at 6:51 PM No comments: 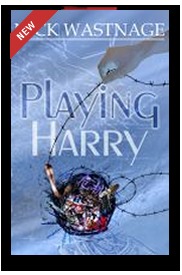 Summary (from Goodreads):
Harry Fingle’s brother is killed in suspicious circumstances. Harry, an acclaimed investigative journalist, is fired, for no reason. He vows to discover the truth. Two people are murdered, a pharmaceutical factory is bombed, and Harry’s loyal ex-girlfriend is stabbed. MI6 and the CIA pull him in to safeguard his life. They tell him he’s been the ball, while they’ve been the players.

Harry Fingle is trying to find his brother’s killer. On his brother’s computer, he discovers a mysterious encrypted file that he thinks contains a cure for HIV. Together with his ex-girlfriend, Amie, and six other tragically flawed strangers, he becomes immersed in a violent and disturbing international conspiracy, that unearths the criminal activities of two of the world’s leading pharmaceutical companies, and exposes the American and British security services as having blood on their hands.

Playing Harry is the story of one man’s epic fight against powerful organisations. His terrifying journey brings him back into contact with his former partner, who never came to terms with their break-up; a successful career woman, grieving over the death of her teenage son; a sad, pathetic alcoholic, who’s continually trying to kick the habit; and a supposedly-reformed drug dealer, who can’t escape his past.

My thoughts:
This is a complex novel with a lot of players and a lot of moving pieces. This is a the type of novel that's difficult to write really well. The characters themselves are portrayed well, their motivations and emotions are clear and understandable.

I had a hard time getting into the story because it flashed quickly between points of view, and it took me a while to put the pieces together to figure out where the story was going. Nick himself is portrayed as kind of a dick, and the fact that he's been through a good amount of crap, doesn't make him any less of a dick in the way he handled the situation...especially to the ex-girlfriend. Granted, at the end he recognizes that he's been a dick, but I went through the whole story not really liking Harry all that much because, you know, he was a dick.

In fact, as well as the characters were portrayed, I really didn't feel much attachment to them.

The dialogue didn't flow well for me. Most of the speech sounded unnatural and robotic and extremely formal.

The biggest draw back for me is that the characters' movements were diagrammed to the point where there movements started appearing mechanical. It was really distracting.