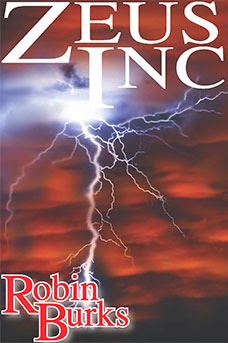 50 years ago, Zeus, Inc., and its CEO, the mysterious Joseph Brentwood, saved the world from a major energy crisis by discovering a new unlimited energy resource. Now, in 2069, Mr. Brentwood has gone missing and private eye Alex Grosjean has been hired to find him by his daughter (and Alex's best friend), Aleisha.

My Thoughts:
OK, where to start with this one. Let's do characters.

Alex, our main squeeze, is I think about 40 years old or so. She was an OK character, not necessarily someone I was necessarily rooting for, which can be problematic for a main squeeze. She's impatient with her mom, and come to find out they have issues from their past, but we never really learn why. She seems prone to anger, and getting angry at times when I was like, really? That just pissed you off? So despite being 40 or so, she's a bit immature.

Could care less about Mr. Brentwood, and nothing in the novel drew me to Aleisha either.

Now Pip, I liked. He's tall, dark, mysterious, my kind of guy. He's strong, he cares, he's Alex's knight in shining armor, though I don't think she appreciated him as much as she should. Now *that's* a point against Alex! Take the beefcake, adore the beefcake, love the beefcake.

The plot is slow, and quite often repetitive. Many times Alex's internalization interrupts the flow of the story. Often times, I think it was supposed to be witty, but for me typically fell flat. I really got into the story when the greek mythology became strongly evident. Loved the way it was inter-woven in the story, with a surprising take. However, I didn't quite believe the ending, when Alex was supposed to be smarter than the Greed gods and take over and save the day. Didn't buy it, and then didn't really see her come up with any plan other than what the gods had originally planned on doing. So yeah, call me perplexed.

Over all, this story was a little flat with enough interesting parts for me to keep reading to the end.
Posted by Unknown at 10:05 AM