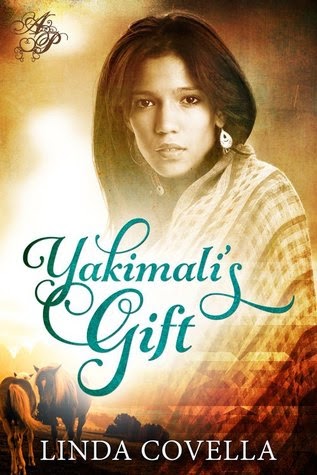 Initial Thoughts: Entrancing historical romance!
Summary:
It’s 1775 in Mexico, New Spain, and 15-year-old Fernanda Marquina, half Pima Indian and half Spanish, can’t seem to live up to her mother’s expectations or fit into the limited female roles of her culture. While she tends her garden, matches wits with buyers and sellers at the weekly market, and avoids Mama’s lectures and the demands of Nicolas, the handsome soldier pursuing her, Fernanda grabs any opportunity to ride the horses she loves, racing across the desert, dreaming of adventure in faraway lands.

But when a tragic accident presents her with the adventure she longed for, it’s at a greater cost than she could have ever imagined. With her family, Fernanda joins Juan Bautista de Anza’s historic colonization expedition to California.

On the arduous four-month journey, Fernanda makes friends with Feliciana, the young widow Fernanda can entrust with her deepest thoughts; Gloria, who becomes the sister Fernanda always wished for; and Gloria’s handsome brother Miguel, gentle one moment, angry the next and, like Fernanda, a mestizo–half Indian and half Spanish. As Fernanda penetrates Miguel’s layers of hidden feelings, she’s torn between him and Nicolas, who has joined the journey in the ranks of Anza’s soldiers and whose plans include marrying Fernanda when they reach California.

But propelling Fernanda along the journey is her search for Mama’s Pima Indian past, a past Mama refused to talk about, a past with secrets that Fernanda is determined to learn. The truths she discovers will change the way she sees her ancestry, her family, and herself.

My Thoughts:
What a ride! This is a YA historical romance with the unique setting of Mexico, California, Spaniards, and Indians. It's an interesting tale of the trek from Mexico to colonize California, and this novel depicts the very real hardships endured during the expedition.

And sprinkled throughout this subtle history lesson, are very real characters whom it would be difficult not to believe were actually part of the expedition. You immediately feel a connection to Fernanda, her inability to accept the stifling constraints of her time (marriage, children, and inferior heritage), and her longing for freedom and adventure and romance. You feel her struggle between wanting to do what's right to please her mother, and longing for something more. And then there's her struggle between a safe marriage, and adventuring into the unknown.

All of the characters are so well drawn and believable. Though Nicolas is more than nice to Fernanda, there's always that hint of superiority and, um, *maleness* which was common for the time when men were truly the boss and law. I loved Miguel, his anger and mystery and the many layers of his character.

The plot moved well, a very visual read and beautiful descriptions that allowed me to picture the scenery. I was rooting for the romantic pair, and was not disappointed in the end!
Posted by Unknown at 9:19 AM

Thanks so much for the review, Dale! I'm glad you enjoyed the story. :-)