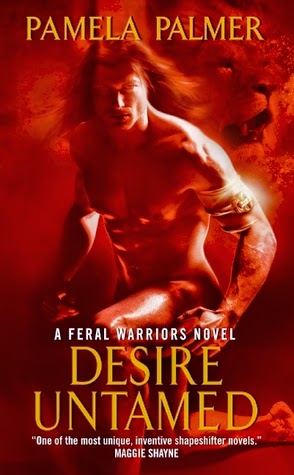 Initial Thoughts: Hot and steamy!
Summary:
They are called Feral Warriors—an elite band of immortals who can change shape at will. Sworn to rid the world of evil, consumed by sorcery and seduction, their wild natures are primed for release . . .

Kara MacAllister's quiet small-town life is transformed forever the night a powerful stranger rips her from her home, claiming she is the chosen one—the key to his survival.

Spiriting her away into the rain-soaked night, Lyon reveals a truth Kara can barely credit. She's immortal, and the only one who can save his race. And deep within her, he arouses a fierce, primal hunger beyond anything she's ever imagined.

But only when their lives are threatened by an ancient evil will Kara and Lyon realize they have found a love they would risk their immortal souls to claim . . . and a powerful desire that could never, ever be tamed.

And he begins to wonder if the woman who's stolen his heart is destined to be his salvation...or his doom.

My Thoughts:
Okay, usually not a fan of shifters, but I enjoyed this read very much. I think because the story had more to do with plot and character development than focusing on the actual shifting. The steam factor is pretty high; sure to make your hair frizz.

I liked Kara, and I loved Lyon. There are some minor characters I loved as well. I felt their journeys were real and believable. Lyon puts the good of the clan above his own desires ... well, *most* of the time. He slipped a time or two with Kara (wink wink). The man just couldn't help himself!

Parts of it were a little too predictable. Knew who the bad peeps were, figured out *how* the bad peeps were manipulating everyone. I would have preferred a few more red herrings to keep me guessing at what would happen. Some of the sacrifices in the end did take me a little by surprise, so that's good.