Tell Me Something Tuesday 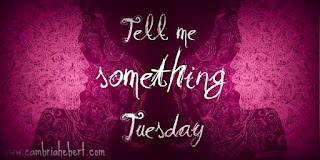 A friend of mine, Cambria Hebert, has this little meme going on on her Tuesday blogs. Here's the scoop:
Tell Me Something Tuesday is where I ask you something and you tell me the answer!! It’s as simple as that and I thought it would be a great way for all of us bloggers to get to know one another! So this is how it works: I post a question here on my blog and then i give my answer. I invite all the bloggers to take the question and post it on their blog with their answer and we can hop around and see what everyone says! If you are a blogger don’t forget to leave your link at the bottom of this post! If you aren’t a blogger – that’s okay too!! Leave your answer in the comments section!

This is my first time taking part, but the thing to do is to hop from one blog to another and checking out people's answers. It should be fun, and a little different, and I'm in for trying anything once! You have to go to Cambria's blog to tour the answers, though.

So this week's question is: At what point do you think a series has gone on too long? How long should a series be?

For me, the series should end when the story should end, so I think the answer is different from series to series. If I love the series, I don't want it to end. If the series is dried out and stale, time to throw in the pencil and call it a wrap. The trick is to end on top. You don't want the series to get to the stale point; it should end in a way that is good for the story and the characters and satisfying to the readers. If it goes on too long, the readers are going to (a) complain, (b) beg the author to please put an end to it, or (c) just stop picking up the books.

Nothing is worse than a series that's being stretched out for monetary or marketing reasons. Should Twilight have had 4 books to that series? Heck no. Was 7 Harry Potter books too much? Heck no. I'm not saying I was gung ho on that last book (too long), but it was the right way to end the series, and each book was a year in Harry's life and furthered the story, so there was a point.

The Lords of the Underworld series is in the 2 digit numbers...and I've yet to get tired of it because each book focuses on a different character...each book is in its own way unique and fresh.

Hi Dale! Welcome to TMST! So glad to see you joined in this week! I hope to see you again!
I enjoyed reading your answer and I agree with most of it! I do think it varies from series to series and it depends on the author's wirting style.
:-)

I have read a few of the Lords of the Underworld. I like that it features a new character every time, but some things are recycled: tormented guy, virginal women... I like them though, they are fun reads. And yes, Harry Potter had a point - one school year for each book - the time frame, any time frame, is something that more authors should use when writing a series. New follower! http://breatheinbooks.blogspot.com

Totally agree that there is nothing worse than a series being stretched out for monetary reasons... I haven't read Twighlight, probably due to the mania surrounding it - but hey, I guess if a series is well done, then why not give reader more?!

That is true about the LOTW series...it does follow a specific format each book, but I don't know...there's something about it that just grabs me! Of course, I haven't read the entire series yet, but maybe I will be tired of it when I get to number 'infinity'. LOL