The Darkest Secret (Lords of the Underworld #7)
Gena Showalter 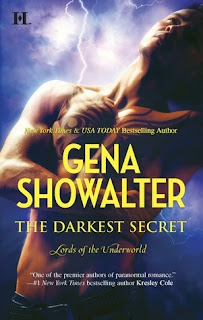 Summary (from Goodreads):
Keeper of the demon of Secrets, Amun can manipulate the darkest thoughts of anyone nearby. But when the immortal warrior is chained and isolated to protect those he loves, death is his only hope of release—until he meets Haidee, a fellow prisoner whose beauty and hidden vulnerability draw him into a reckless test of his loyalty.

Haidee is a demon-assassin, raised to despise Amun's kind. Yet how can she hate the man whose touch sets her aflame? But to save him, she must give herself body and soul...and face the wrath of a powerful adversary sworn to destroy her.

My Thoughts:
I've always had a soft spot for Amun. He's the tortured guy who's afraid to talk because all those awful secrets he's accumulated over the years might spill out and hurt people. No one *really* wants to know what others are thinking all the time. There's just something about the strong, silent types that I adore.

And Amun is adorable.

But he deals, cuz he's a tough guy and despite hosting a demon, he's a nice guy, too. And he would do anything for his brothers.

As usual, characters are great, story is great, writing is great. But this one is a little slower, not as much action. Also, I was very unsettled about some of the, hmm, not animosity--that word's too strong--but opposition between some of the Lords. Okay, between Amun and Strider. There's a challenge there, and it didn't really end well, and it's over a woman. I didn't like it. I understand it, and in reality this is probably something that would and could happen in a household of men. But you know what? Reality bites, sometimes. The ending left me unsettled and I wasn't totally in my happy place.

I mean, I still liked the story, just not quite as much as some of the other books in the series.

Still a great read, and I wouldn't have missed it for the world.
Posted by Unknown at 3:25 PM