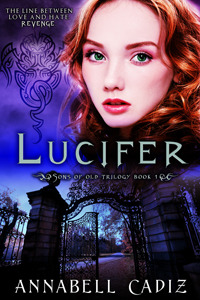 Summary:
Have you ever wondered what could be hiding in the shadows?

Well, for eighteen-year-old Zahara Faraday, she doesn’t have to wonder. You see she comes from a lineage of Light Witches, those who have chosen to help protect and serve between the supernatural world and the human world. The only problem is Zahara, like her father Solomon, is as human as a human being can be whereas her mother, Mia, and her Aunt Catalina, were born as Light Witches. As a family they hunt down rogue supernaturals—creatures who harm humans or who have committed an act against their kingdom.

Zahara’s hunting skills are usually kept dormant since her parents would prefer she live life as a normal human girl without knowledge of the supernatural world. She plans on doing just that—except when she finds a couple being attacked by fairies, she has no choice but to step in. Before she can return to pretending to be blissfully ignorant, Zahara encounters a problem she isn’t the least equip to handle: Bryan Hamilton, the good looking new co-worker she has to help train. In a heartbeat, her best friend, Becca King, has set her up on a double date with herself and her new crush, Rekesh Saint-Louis, who happens to be the most powerful leader of the biggest Imago Coven in South Florida –supernatural creatures with the ability to control water . . . and suck out human souls.

Zahara has no time to focus on how she’s going to explain her double date with her best friend and the enemy they have a tentative truce with to her parents because soon one of the members of Mia and Catalina’s coven is found murdered with a strange tattoo of a snake with wings carved into his arm.

Zahara is then thrown into a whirlwind battle with an angel determined to have revenge against God, an Imago coven she doesn’t think they should trust, and slew of dream-eating fairies and powerful Nephilims, hybrid children of angels and humans, more than happy to rip her to shreds.

Normal just got a deadlier definition.

My Thoughts:
This could have been rated 3+ or 4-...I went with 4- because the overall concept is a good one, and I liked the exposure to supernatural beings that I've not met before (a.k.a Imagos). Also, I was curious what would happen in the end, and there was a little twist I wasn't expecting. You all know how I love me some twists!

I have to tell you, the prologue (written in a different time period than the present-time main story) and Lucer's POV had a great voice and flavor that was lost in the present-time writing style. I wished the whole story could have been written in this same tone.

Okay, so the characters. Zahara and Becca are good characters; not the perfect children by any means, which I find realistic and endearing. They don't do everything they're told, and they act like typical teen-agers do, especially when there are hotties involved and houses to sneak out of. :)

I was beginning to think Becca lived with Zahara...and then suddenly her parents popped into the action near the middle. That transition was a little abrupt for me.

I liked Bryan immensely. And I also liked Rekesh. I think he's a bad-ass that's often misunderstood, but he's clearly like-able and I don't think he's as bad as he pretends to be! I could see a whole story around this guy, and it's one I would read (hint, hint).

The writing style stalled for me on occasion. What I didn't like was the over-use of exclamation points, the detailed description of clothes every time a character walked into the room (or so it seemed)...I think every character had at least 6 pairs of shoes (or so it seemed). The dialogue didn't always sound realistic (what teenager refers to teenagers as 'youths'??), and peppered with banal conversation a few times.

I'm not sure the omniscient POV worked for this story...I think I would have liked to learn things as Zahara learned them. The twists in the story would have been twistier, because as a reader you wouldn't see things coming...but being privy to other characters' thoughts and actions, the surprises weren't surprising. The only time this worked was the end twist. I'm sure glad I was privy to the action there at the end! It's a great set-up to the next book...perfect cliff-hanger.

Hey Dale, thanks for a great review. I wish I had your insights into storytelling, I might've been more helpful to Annabell on editing this debut novel. You should talk to her about critiquing the sequel as a beta read to maybe help her polish up the details like you've suggested! I was a bit bothered by the clothes thing too, but Annabell is a definite fashionista... *laugh*

Hey Dale! Thank you mucho for taking the time out to read my book and for writing such a well-thought out review! Really appreciate it!

LOL yeah, Katy, I'm a closeted fashionista but I did try to make sure to dial it back in MICHAEL (Sons of Old Trilogy, #2) ;)

Dale, you and my best buds Bridget and Eve would LOVE a whole book on Rekesh. I don't know if I'll be writing one solely on him BUT there is a LOT more of him and his coven in MICHAEL so at least you'll get to enjoy him more =D As for the "youths" thing, um, me and my best buds actually refer to young people as youths despite the fact that we are in our 20s lol. A lot of the way Zar and Becks talk is actually how we do speak in real life. Don't know if that's do or bad but we crack each other up so it works for us ;)

Katy has a good idea there! If you're up for beta reading MICHAEL, let me know!