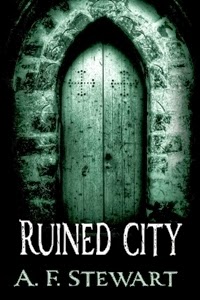 Summary:
In the Northern Pass stands the city of Elowen, the glittering guardian between the Empire of Aloquis and the Kingdoms of Immra. It exists proud and prosperous, never dreaming its dark past was coming to call...

On a bright winter’s day a stranger arrives in Elowen, bearing a secret. From this man a dark blight of ruin descends over the great city and this day becomes known as Winter’s Bane.


The day the world changed for the people of Elowen.
The day their existence turned into a recurring nightmare.

Read of the aftermath of revenge through the eyes of a shopkeeper, a child, ghosts, a blacksmith, a guardsman, an innkeeper, and even a King.

My Thoughts:
Okay, I didn't say initially "surprisingly good" because I thought the story was going to suck, or because I've never liked anything written by this author, but because (a) it's a pretty short story, and (b) I thought it was 12 separate even shorter stories.

I traditionally don't like short stories, and I picked this up even though I thought it was an anthology because a Goodreads group I'm in was reading it. So I thought, what the heck, it couldn't hoit!

What surprised me is, despite the above, I really liked it. The twelve stories were interwoven into one cohesive story that spanned decades. It's the same story, just told from different points of view. It did get a little glitchy at times spanning different time periods, and the adjustment at times was a bit rocky, but overall I didn't have a problem figuring out and following the timeline.

Each POV is told in first person. While that may seem awkward and questionable, for me it worked because you spend so little time with each character, the first person POV gives you better insight into their thoughts and feelings. I liked being able to get into each character's head for our short visits.

If you're looking for a quick, engaging fantasy, give this one a try.
Posted by Unknown at 12:20 PM