Book Review: A Demon Made Me Do It, by Penelope King

A Demon Made Me Do It
Penelope King 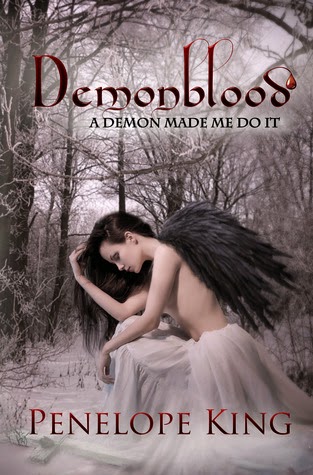 Initial Thoughts: A unique twist to a love triangle that was way cool.

Summary:
Half human, half demon Liora Greyson just wants to survive her final year of high school unscathed, her dark secret intact. But the walls she's carefully constructed to keep people out crack wide open once she meets the sexy and mysterious Kieron Ambrose, and he lights her cold world on fire.

But it turns out Kieron has a few dark secrets of his own. Secrets that will either save or destroy her.

The great part about this book is that Liora's human and demon halves really want nothing to do with the other. They despise each other. When one's awake, the other sleeps. And they piss each other off to the extent that they really try to stay asleep while the other one's awake, because what the other one does grosses out the other half. Twisted, right? Right! And so awesome!

Seriously, there were times when one half or the other would really put the screws to the other, and I'd be like, come on, give the girl a break. But that's good, because it means I was invested in the character(s).

Liora's demon half, Lucky, has a best friend named Bones. Oh, boy, I'd love to meet Bones in real life. Is there any cover art for this stud muffin? Too bad he's an incubus in search of nubile virgins every night, otherwise he'd be the yummy stuff boyfriends are made of. But who wants to share? Not Lucky.

Kiernon is cool. I wasn't as attached to him as I was to the other characters. Maybe it was because I kept waiting for the other shoe to drop. I was never quite sure if he'd be good in the end, or bad. In the end it was interesting... but almost disappointing. I wanted more... I don't know .... BANG. I'm not explaining myself well, but read the book and form your own opinions.

The only real issue I had was with setting. I got a little confused. The writing led me to think the setting was approaching winter, gray, leaf-less trees and kind of cold. But then they'd drive an hour into the mountains, and they'd be fishing and having picnics and I think flowers were mentioned. Huh? I didn't get it.

Other than that, excellent. Definitely put this on your 'to be read' pile.
Posted by Unknown at 8:14 AM