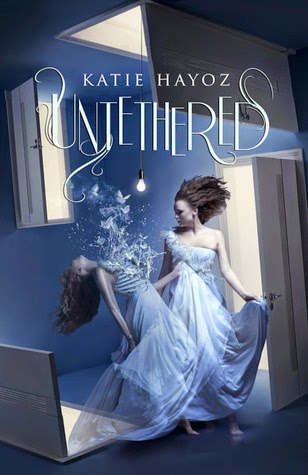 Summary:
Sylvie isn’t comfortable in her own skin. In fact, there are times she can’t even manage to stay inside it. But if there is one thing she’s sure of, it’s her love for Kevin Phillips. She’s willing to stake everything on it –her family, her friends, and possibly her soul.

Sixteen-year-old Sylvie has been best friends with Cassie forever. But everything is turned around when the boy Sylvie’s loved since fifth grade falls for Cassie. Devastated, Sylvie intends to get Kevin by any means possible, even if it involves treachery, deceit, and the dark side of astral projection. She is positive her plans will give her what she wants, but she doesn’t count on it all spiraling out of control.

My Thoughts:
So you have this girl, Sylvie, who doesn't see herself as others see her, nor does she see others as they should be seen. She's blinded by her infatuation with Kevin, and then later blinded by her jealousy of her best friend. It's pretty typical teen drama.

I liked Sylvie, though I did get frustrated with her. I'm like, wake up, and see what's going on! I understood her though, felt her frustration when talking to some condescending adults, but I can see their point too. I mean, who would ever believe the girl was lifting outside her body? I'd probably think she was nuts too!

There are other characters that I really love, especially Nelson. He seems like such a cool guy, and if I were in high school, I'd probably think he'd be the perfect boyfriend! Maybe it's the blue hair. Maybe it's the artist thing.

What I liked most about this novel is how real and life-like the characters progressed, all of them. Everything was so typical and believable. You watch Sylvie spiral into darkness, and then you watch her try to climb her way out. You understand Cassie's development, because every nobody in high school always wants to sit at the cool table. You also understand that the heart wants what it wants...how many people would give up their love for a friend? Not many. You see Cassie's struggles with that.

There were some cool twists, but overall, it was a bit predictable, which pulled off that 5th star in my rating. But extremely well written.
Posted by Unknown at 9:07 AM