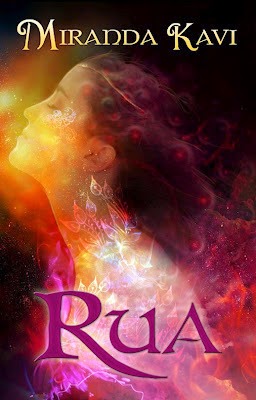 Initial Thoughts: Moved too fast
Summary:
A girl with an unknown destiny.

A boy from a hidden world.

When Celeste starts at a new school in a small, Kansas town, she hears whispering voices, has vivid nightmares, and swarms of blackbirds follow her every move. She is oddly drawn to aloof Rylan, the other new student who has his own secrets. The exact moment she turns seventeen, she wakes to a bedroom full of strange creatures, purple light emanating from her hands, and Rylan breaking in through her bedroom window. He knows what she is . . . Intriguing and deeply romantic, RUA is page-turning YA novel with a supernatural twist.

My Thoughts:
Love the cover. Ain't it beautiful?

So, I was all down for a fae read, cuz I like me some fae. This one was okay for me. The plot seemed to move at a frenzied pace, not giving me time to savor the essence of the story. I didn't get enough to time to feel it.

The book is filled with stereotypes, so the character development is probably about the same as you've read in a hundred other stories. There's really nothing new here, complete with bad boy slipping in through heroine's bedroom window every night and staying till morning while she sleeps. Does *that* sound familiar? Yup, been there, read that.

With that being said, I did like Rylan. He was by far the best character in the book.

I was at times confused with what was going on. That might have to do with the pacing, which as I mentioned went at lightning speed. I would have liked to have spent more time with the world-building.
Posted by Unknown at 7:19 AM