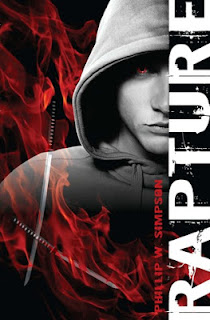 Summary (from Goodreads):
The Rapture has occurred, just as the Bible predicted. The faithful have risen up to Heaven. Those left behind are in a living hell.

Earth burns, hell-like in its oppressive heat. Every volcano in the world has erupted, and tsunamis and earthquakes continue to devastate the planet. Clouds continually rain ash onto the scorched landscape, sparking fires all around. Plants and animals are dying. Food is scarce. The night sky is devoid of stars, and the moon - when it can be seen - is the colour of blood.

The remnants of humanity fight for survival. Most have fled the cities and now hide in caves deep in the mountains. By night, demons stalk the Earth, capturing the remaining humans and killing them - if they're lucky. The less fortunate are converted to worship of the Devil, and ushered into endless hell.

Eighteen year old, Sam (short for Samael) was raised in the town of Jacob's Ladder, Utah. It is appropriately enough near to a place of natural scenic beauty called Devil's garden. He finds himself alone, unable to rise up with his family because he is half demon. His mother, a devout Christian, was seduced by Satan and conceived his child. She smuggled the boy to an old friend Hikari, a Japanese sword master and demon expert. Since then, Hikari and his daughter, Aimi, have been all the family Sam has known.

Now they're gone, and Sam must set out on the mission Hikari charged him with long ago: to help all the humans left behind. Armed only with his beloved Japanese swords and his wits, Sam wanders the post-apocalyptic world alone, separated forever from everyone he loves. Cursed by his demonic heritage, he must now embark on a quest that will take him across the US to the City of Angels.

There he will confront his destiny. There he must fight to save a friend ... and the souls of the living.

My Thoughts:
The cover immediately grabbed me.

This is an amazing book! And don't let the religious premise of the book lead you into thinking this is a heavy-handed-preaching-religious-platform kind of book--it's not. Secular audiences will enjoy this book just as much as the Christian audience will.

The characters: top notch. Believable. Likeable. I'd want to be friends with these people.

Okay, so Sam, our main character, is, well, a demon. But despite the bad karma of his birth, Sam wants so badly to be a good, kind, normal kid. The problem is, he's not. The portrayal of Sam is so well written, so heart-wrenching and gut-wrenching at the same time, you have no choice but to pulled in to his story and feel for him. You like him. You want things to be different for him. You want him to succeed.

So Sam, despite the evil destiny that awaits him, falls into the care of a very religious, caring man, Haikari, and his daughter, Aimi. Haikari teaches Sam to not only learn about good and bad, and good and evil, but to be a warrior. He wants Sam to survive.

The pacing is very good, alternating between present and past with ease and filling in the questions and gaps just right.

The setting: very descriptive, using all the senses so that the reader can really feel the place.

I definitely have this book on my series-to-keep-reading bookshelf. Highly recommended.
Posted by Unknown at 11:44 AM

the plot, characters, the world the author's created do sound amazing. I'll check this one out!