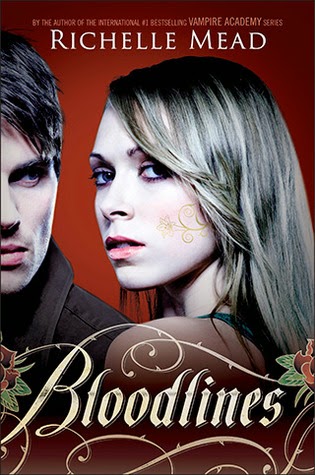 Initial Thoughts: I felt like I was at a party where I didn't know anyone.

Sydney is an alchemist, one of a group of humans who dabble in magic and serve to bridge the worlds of human and vampires. They protect vampire secrets - and human lives. When Sydney is torn from her bed in the middle of the night, at first she thinks she's still being punished for her complicated alliance with dhampir Rose Hathaway. But what unfolds is far worse. Jill Dragomir - the sister of Moroi Queen Lissa Dragomir - is in mortal danger, and the Moroi must send her into hiding. To avoid a civil war, Sydney is called upon to act as Jill's guardian and protector, posing as her roommate in the last place anyone would think to look for vampire royalty - a human boarding school in Palm Springs, California. But instead of finding safety at Amberwood Prep, Sydney discovers the drama is only just beginning...

My Thoughts:
So, here's the deal. I liked this book, but it took me a while to figure things out. And some things I'm still not sure of, but am too lazy to go back and re-read stuff in the beginning. Yeah, I said it. I'm lazy. If you've read the Vampire Academy series, you're good to go, since this is Richelle's 2nd series, with some returning characters. For about the first 1/4 of the book, I felt like I was with a group of friends who all went out the night before, and had a bunch of inside jokes that left me clueless. I felt like I should have known these characters a lot better than I did. It didn't start off good.

For example, I don't understand why the vampires listen to anything the alchemists say. The vampires are stronger, faster, better. They could crush those little alchemists...right? Maybe not. It's those kind of links I felt I was missing when I read.

Point 2. It says right in the summary that alchemists dabble in magic, yet when you read the book, the alchemists hate magic, think it's horrifying and unnatural. Magic makes Sydney want to vomit. So again, me scratching my head.

Anyhoo, once I got past all that...and I did...I enjoyed the story. I liked Sydney, didn't trust her supposedly sweet sister as far as I can spit, adored Adrien who showed the most growth in the book. From what I've read, he was kind of a dick in the VA series, but he totally grew on me here. I hate Sydney's pompous father, wanted to strangle that dick-in-training Keith. No surprise that her father loved him...2 dicks in one pair of trousers. But this is all good. Characters who bring out these emotions in readers is a totally good thing. I love hating and loving characters. Makes the book good.

Did I figure out the plot ahead of Sydney? Yes, I did, but I'm not sure the point of the story was the mystery or a race to figure out 'whodunnit'. But there were some surprises. Not the who, necessarily, but the why. There were just too many bread crumbs on the trail to not figure out the ending ahead of time.

But I still enjoyed it, and will keep reading.
Posted by Unknown at 7:24 AM