Book Review and Giveaway: Seeking the Storyteller, by Jessica Walsh and Briana Lawrence

Seeking the Storyteller
By Jessica Walsh and Briana Lawrence 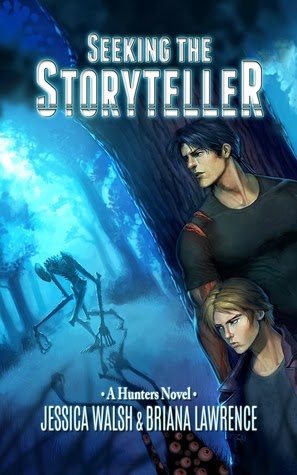 Summary:
I know of the Storyteller, it whispers into the man’s ear, I’ve met him. If you promise not to kill me, I’ll take you to him.

Alix Andre DeBenit and Randall Fagan are Hunters, part of a hidden network of humans who track and kill the monsters lurking in our world so everyone else can pretend they don’t exist. But when a living shadow mentions someone called the Storyteller, Alix hesitantly decides to learn more.


They say the Storyteller lives in a massive library full of books that tell every being’s life story. He can read
these books, rewrite them and change anything he wants, even if
it’s already happened. That’s the power Alix wants, the power to bring his murdered family back and he’s determined to make the Storyteller do it.

He just has to decide if working with the very creatures he’s supposed to kill is worth it.

My Thoughts:
This book has great premise, with some very nice world-building. I have to admit, I did struggle with the omniscient point of view in the beginning. Once I got used to it, I was fine. Alix's motivation is clear and he doesn't stray from that. He's a very consistent character, and one that you're not sure if you like or hate, or maybe just want to slap up side the head and yell, "get over it, man!".

Even though Fagan was hard-ass and gruff, you got to know him enough to know there's a heart in there. Of the major sub-characters, Dox is the most memorable. I constantly kept trying to picture him, and wasn't sure whether I'd be jeebed or not if I met him. I probably would! I really liked Haven. Probably one of my favorite characters.

And speaking of characters. Yes, there's one doozy of a surprise. And I like my surprises. :)

The demons were different, and I liked reading about the various...what do you call them? Breeds? I dunno. I liked the dragon-folks quite a bit. They seemed the most mature and steady. The fox people made me feel kinda awkward with all that touchy-feely stuff going on, but they were nicely drawn. Anything that gets a reaction from me is good, in my opinion.

The plot, at least when it came to Mira, a fox-girl, and Alix, moved forward. There were a lot of characters introduced that I'm not quite sure what they brought to the story. Some seemed to have a story to tell, but we didn't hear the end. I also got lost a bit with the names of certain demons, and I think those are the ones that we weren't dealing with but had a lot of history. I had trouble connecting some dots there, though I eventually figured it all out. I think. :)

At times, the dialogue strayed, and didn't hit the mark. For example, there was a lot of stuttering when people were nervous...especially at the end. For me that detracts. I'd rather see that nervousness portrayed through actions or description. Most times it was good, but it strayed enough for me to take note of it.

All in all, I found myself gripped in the story as it progressed, and looked forward to those moments where I could pick it up and read. When that happens, you know you have a gem in the making.

Now for the Giveaway deets!
2 lucky winners will receive an ebook copy of Seeking the Storyteller. Easy entries for your chance to win.
a Rafflecopter giveaway
Posted by Unknown at 6:56 AM