Book Review: The Billionaire and the Barfly, by Adrianne James

The Billionaire and the Barfly
Adrianne James 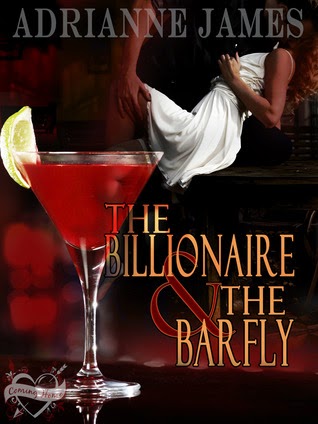 Initial Thoughts: Took me more than a minute to get engaged. Oh, and love the woman's dress on the cover!

Summary:
Henry Maximus is a super-hero-loving geek and proud of it. He’s also a genius when it comes to business. It’s how he earned the title of CEO of Maximus Gaming … not to mention the billions of dollars in his bank account. Henry’s tried living the life of a bachelor, but a different girl every night has left him wanting more. Needing more.

Aubrey Vincent is in love with her job. She’ll love it even more if she lands the promotion that gets her out of her parent’s attic. She loves it so much that she has no time for relationships, not that she was ever very good at them to begin with. Aubrey is perfectly happy with the random, nameless men she picks up at the bar.

After a brief encounter with Aubrey on a business trip, Henry packs his bags and moves back to the small town where he grew up. Aubrey’s town. Aubrey attempts to find her way into Henry’s bed, while he tries everything to get into her heart. Will Henry’s plan to break down the walls Aubrey has built around her heart work or will his unbelievable million dollar offer scare her away?
My Thoughts:
So, initially, I wasn't into it. Aubrey, and I believe she even said this about herself, is not an easy person to like. She's shallow, not looking for love, likes the one-night stands with no strings and no attachments, and admits freely to being this way. I get that she's portrayed this way in the beginning because the story follows Aubrey on her growth in character. However, as I got to know the characters, I was more invested in the story and their lives.

Henry. Hmm, what do I say about Henry. I'm not sure I buy the whole geek-turns-god kind of thing. Seriously, if he was that hot in high school, I think the whole geek thing would have been over-looked. Maybe not by all, because we know high school can be cliquish and cruel, so maybe it's not that far of a stretch. Was it the money that made him hot? The confidence that success and money brings? I don't know. I loved Henry's passion and loyalty. I loved the cool billionaire style. I just couldn't picture him as hot. :)

I thought Ben, Aubrey's younger brother, was an awesome character. I loved him. Hated the girlfriend. And if Aubrey's dad was my dad? I would have moved out when I was 16. I found him suffocatingly rigid. And Jenna. Oh, I wanted to jump on her back and pull her hair! What a bee-ach.

So, I think what would have made me like Aubrey better, is to know her better. She sees herself as a failure. Sure, I get that she's still living in her parents' attic, couldn't finish college (why, I ask...it's not explained), couldn't keep a relationship...and again I found myself asking why. I would have liked to have gotten to know Aubrey better, what drove her and motivated her through a little bit of back-story. Maybe it was there, and I've forgotten, but if the examples were there, they passed too quickly for notice.

To me, the ending wasn't totally satisfying because I thought some things should have been wrapped up. A good romance will have the naughty people get their dues, and the nice people get their rewards. Not enough dues were paid, in my opinion. Does that make me a vengeful reader? Of course! It's satisfying to see bad people fail. I admit it.

As for plot, it moved forward and steady, with a nice progression of Aubrey and Henry's relationship. I felt that Aubrey's road in this story was believable, and her growth didn't come too soon or take too long, which is how it should be.

All in all, a nice little romance. But one final word, is that the writing needs some editing.
Posted by Unknown at 9:51 AM