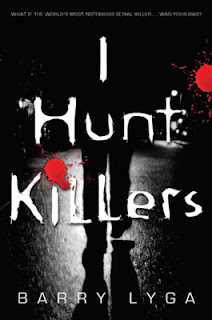 Jasper "Jazz" Dent is a likable teenager. A charmer, one might say.

But he's also the son of the world's most infamous serial killer, and for Dear Old Dad, Take Your Son to Work Day was year-round. Jazz has witnessed crime scenes the way cops wish they could—from the criminal's point of view.

And now bodies are piling up in Lobo's Nod.

In an effort to clear his name, Jazz joins the police in a hunt for a new serial killer. But Jazz has a secret—could he be more like his father than anyone knows?

My Thoughts:
Wow. This book is, shall I say it? A killer of a book. If you think it's about death and gore and horror, it's not. It's a psychological case study of a kid who tries so hard to not be what he thinks the world thinks he is going to grow up to be, and trying so damn hard to be a decent human being, but ends up internally questioning his every thought and motive 24/7. It was brilliant.

I loved the characters. Jazz is so like-able in his tormented way. He got a shit deal in the hand of life. But he doesn't want to be damaged by it. He tries hard to not be damaged. You just can't help but like this kid and root for him. Every time he questions himself, you want to pat him on the back and say, 'It's going to be okay."

I love the sheriff and his good heart and his tolerance of Jazz. He doesn't hold it against Jazz that his dad was a serial killer.

The plot moves you along at a steady pace, and you're not quite sure how it's going to end. I gobbled pages so fast, I got heart burn. I couldn't wait to finish.

This was brilliantly written. The title indicates there is more Jasper Dent to come. God, I hope so.
Posted by Unknown at 6:09 PM

This was a great buy! One of those books you can't put down. The author paints a very good picture of what it could be like to be the child of a sociopath. I don't want to spoil anything for the readers. So I'll just say I would recommend this book to anyone who enjoys a good thriller.