Book Review: Daughter of Smoke and Bone, by Laini Taylor 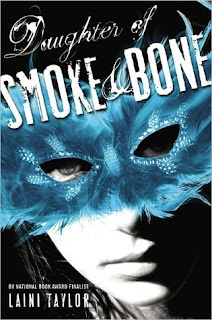 My Initial Thoughts: Very intriguing, with descriptive and engaging characters.

Summary (from Goodreads):
Around the world, black handprints are appearing on doorways, scorched there by winged strangers who have crept through a slit in the sky.

In a dark and dusty shop, a devil’s supply of human teeth grown dangerously low.

And in the tangled lanes of Prague, a young art student is about to be caught up in a brutal otherwordly war.

Meet Karou. She fills her sketchbooks with monsters that may or may not be real; she’s prone to disappearing on mysterious "errands"; she speaks many languages not all of them human; and her bright blue hair actually grows out of her head that color. Who is she? That is the question that haunts her, and she’s about to find out.

When one of the strangers—beautiful, haunted Akiva—fixes his fire-colored eyes on her in an alley in Marrakesh, the result is blood and starlight, secrets unveiled, and a star-crossed love whose roots drink deep of a violent past. But will Karou live to regret learning the truth about herself?

My Thoughts:
I really, really liked this book about 3/4's of the way through. Karou is a great character, vivid, real, like-able. What I liked about her the most was her acceptance of her lot in life. Orphaned, raised by some epicly weird dudes (creatures) that she keeps secret, doing the little deeds demanded by her guardian, Brimstone, which she doesn't always enjoy but seem exciting none-the-less, and doing a wee bit o' wishing magic here and there with some help from Brimstone.

The author weaves in such a creative, imaginative world right alongside our own. You can feel, hear and see things seeping from the pages. The creatures in her house love Karou.

And there's Akiva. Mm mm mm. Beautiful angel, in all the right ways except his personality. He's hard and cold and distant and absolutely yum. It's wonderful to see that exterior begin to crack as he clashes with Karou.

The ending is epic. A twisted betrayal that unfurls like the sails of a boat as the wind picks up. The story follows a strong undercurrent of secrets and lies of a past that isn't what it seemed, and that comes back to haunt both Karou and Akiva. It's an ending that will have your mouth dropping open.

Here's what I didn't like. While I enjoyed the unfolding of the past story immensely and loved how it tied in to the huge epic twisted ending, I thought it went on too long...and the writing of the past romance was a tad bit too flowery for my tastes. I found myself raising an eyebrow and saying, "Really?"

The book is a solid 'yes' in the recommendation department.
Posted by Unknown at 7:16 AM