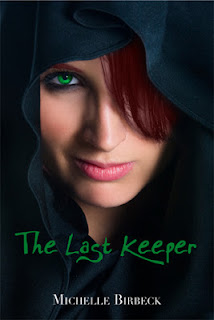 Initial Thoughts: Good, just not riveting until the end.

Serenity Cardea's race has been hunted to near extinction. She's a Keeper, with the ability to influence others, including those immortal beings who want dominance over the world. Ray Synclair is a history professor in training with a passion for times past. Fascinated by Serenity, he has no idea that the world is filled with immortals, most of whom want him dead. Because the only way to kill a Keeper is to kill their partner...

While I understand the importance of developing the relationship between Serenity and Ray, it just went on forever with nothing happening. It was so mundane that it would be easy for the reader to lose interest. If you keep chugging, however, there is pay-off in the end.

I didn't feel the chemistry between Serenity and Ray that I would have liked. If there had been more, I don't know, it going on, the first 2/3s of the story wouldn't have been so mundane, but there really wasn't any spice. It was all very calm, cool, and collected. It's a nice story, but  not one that would keep me up at night reading.

I'm hoping the 2nd book in the series starts out with a bang, now that we got all that history out of the way.