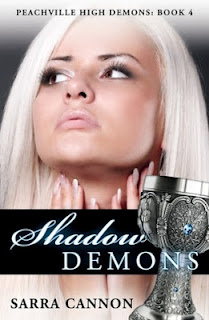 This is Book 4 in the Peachville High Demons series. Harper is a powerful, albeit newbie, witch. She will lead the Peachville coven when she comes of age. The problem is that Harper disagrees with how the method the witches use to get the most powerful juice...basically, harnessing demons. This is especially hard for Harper since her boyfriend, Jackson, is a demon.

Jackson is an incredibly sexy character. I love Jackson, and he doesn't fail me in this installment. Harper is true to character; she's real and down-to-earth and is one of those characters that you root for right from the start. In Book 4, we're still rooting for her. I was surprised to see that there is another book after this one; for some reason, I thought the series was ending with Book 4...I'm happy to see another book and look forward to reading it.

If you've been following this series--and if you haven't, you should--you'll find in this book we see more behind the scenes with the coven. It may look pretty and manicured on the outside, but on the inside it's full of back-stabbing politics and power-hungry, greedy evil-doers.

My biggest complaint with this book is that it's been a while since I read Book 3, and the author didn't do enough to remind me of where we left off in the plot, who some of the minor characters are, and vague references to events in Book 3 that seemed incredibly important, but I couldn't remember. I almost considered putting the book down and re-reading Book 3 to get myself up to speed, and vetoed that idea and plowed through, with the hopes that continued reading would jar my memory. It didn't.

Overall, though, I still liked the book immensely, but is one of those series that you're better off reading straight through.