In the Hot Seat with author Christine Anderson 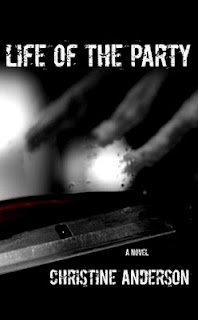 About the book (taken from Goodreads): Seventeen-year-old Mackenzie Taylor can't wait to be free; free from high school, the shadow of her perfect older sister, and her disapproving parents. The rebellious party girl has a perfect accomplice in best friend Riley, a boy from the wrong side of the tracks who scores them drugs, booze and under-age entry into the only club in town. But then everything changes. A traumatized Riley suddenly decides to give up the party life, and a wide-eyed Mackenzie meets Grey Lewis, a broodingly talented, gorgeous older man she falls instantly in love with. Though Riley warns her to stay away, the aspiring rock star's body and ample drug supply are too tempting for her to resist. Previously inseparable, Riley and Mackenzie go their separate ways.
When summer hits, Mackenzie has new friends, a new apartment and new drugs to mask the pain of Riley's absence. And of course, she has Grey. But despite the fierce, consuming passion they share, the mysterious bad-boy always leaves her guessing. Is Grey really a good guy? Or was Riley right about him all along? Mackenzie's in too deep to care. Unable to curb her mounting addictions, before long the lust-for-life teen totally loses control. She forgets Riley, forgets life, forgets everything but Grey and their next hit. But luckily for Mackenzie...Riley has never forgotten about her.
*******
Sounds intense! Now, on to the hot seat!

Dale: Tell us a little about Mackenzie.

Christine: Mackenzie is really smart and talented, but embittered by feelings of inferiority, she gives up and starts rebelling. She's young and naive. She tries to seem bad-ass, but deep down she's a really good person who desperately wants to feel loved--even if the people/things that give her that feeling aren't good for her.
Dale: OK, now tell us something about Mackenzie that we *don't* know...something that's not in the book.

Christine: Riley was the one that introduced Mackenzie to weed, and at first she didn't like it. It made her feel slow and stupid. But when Riley started spending more time with his pot-smoking friends than her, she made herself keep doing it. And before long, she loved it.
Dale: Where do you get your inspiration to write?

Christine: God inspires me every day. I always hope my writing will send a positive message to whoever reads it, and maybe help someone with the same struggles I faced before I knew Him.

Dale: What's the first book you read that made you catch your breath?
Christine: Meridon, by Phillipa Gregory. That book is so brilliant, even if you don't read the first two in the Wideacre series. By the end I was white-knuckling the pages.

Dale: If your book was to become a movie...a. What would the theme song be?

The Familiar Taste of Poison, by Halestorm. Or Nothing Special by Ill Scarlett
b. Who would play Mackenzie? 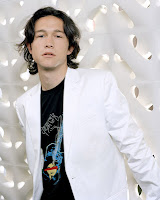 d. Who would play Grey?

(Dale: Having read the book, these are great choices!)
Dale: When you write, are you a plotter or a pantser?

Christine: A bit of both. I don't write anything down, but I picture all the major scenes in my head first and figure out the basic plot. Then, as I write, the story tends to take on a life of it's own, so a lot of it changes on a whim. I work out the plot kinks as I go and do a LOT of re-writing. Dale: When did you first realize that you wanted to become a writer?

Christine: I love to write, it's always been a hobby/passion of mine. After I had my first baby, I definitely became more serious about it. If writing was my full time career...it would be a dream come true. Dale: Do you listen to music when you write? If so, what music do you listen to?

Christine: Yes! I have to! When writing Life of the Party I listened to the same 30 songs over and over again. They helped me get into the setting and mood--heavier music, like Avenged Sevenfold and Rise Against.

Dale: Is there a little of yourself in any of your characters? If so, who?

Christine: Most definitely. I had a lot in common with Mackenzie when I was a teenager. Dale: Hot seat questions:
a. Beach or mountains?

I don't watch a lot of tv, but Arrested Development is probably the most hilarious, cleverly written show I've ever seen.
f. Favorite color?

Probably pancakes, with whipped cream and maple syrup. Or pasta. And cheese.

i. What was the last thing you ate?

Night owl, I don't actually wake up until about 8:00 at night.

Thanks Christine for joining us today! If you want to check out Christine's book, you can stalk her at the usual places...

Awesome book! I read it twice in a row. I got so immersed in the story and the characters' hearts that I was sorry to have it end. The actors that she has envisioned for the future movie are perfect - can't wait to watch it!
I'm looking forward to more books from this author, she seems like a really amazing lady :)

I agree. My review will be coming, but suffice it to say, I was at a *really* good part, and my husband came to kiss me good night...and I *shooed* him away! LOL