Today I'm dragging the charming David Estes into the hot seat. Let's take a look at him, shall we?

Not only does David look like a guy who likes to have fun, he's the young adult author of 2 series, the Evolution Trilogy and The Dwellers Saga. David's recent work, The Moon Dwellers, is the first book in The Dwellers Saga. 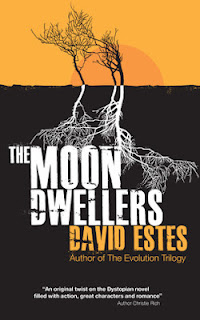 In a desperate attempt to escape destruction decades earlier, humankind was forced underground, into the depths of the earth, creating a new society called the Tri-Realms.

After her parents and sister are abducted by the Enforcers, seventeen-year-old Adele, a member of the middle-class moon dwellers, is unjustly sentenced to life in prison for her parents' crimes of treason.

Against all odds, Adele must escape from the Pen and find her family, while being hunted by a deranged, killing machine named Rivet, who works for the President. She is helped by two other inmates, Tawni and Cole, each of whom have dark secrets that are better left undiscovered. Other than her friends, the only thing she has going for her is a wicked roundhouse kick and two fists that have been well-trained for combat by her father.

At the other end of the social spectrum is Tristan, the son of the President and a sun dweller. His mother is gone. He hates his father. Backed by only his servant and best friend, Roc, he leaves his lavish lifestyle in the Sun Realm, seeking to make something good out of his troubled life.

When a war breaks out within the Tri-Realms, Tristan is thrust into the middle of a conflict that seems to mysteriously follow Adele as she seeks to find her family and uncover her parents true past.

In their world, someone must die.

So, let's get David in the hot seat and watch him sizzle.

Dale: Tell us a little about Adele and Tristan.

David: In my new YA dystopian novel, The Moon Dwellers, Adele and Tristan are the female and male protagonists, respectively.  In The Moon Dwellers, humans have been forced to live underground, as the earth’s surface is uninhabitable.  Due to the President’s shameless pursuit of power, a class system has arisen, in which the rich get richer and the poor and overtaxed get poorer.
Seventeen-year-old Adele is a member of the middle class moon dwellers, and has been sentenced to life in prison due to her parents’ crimes of treason.  Trained from her childhood by her father, Adele is armed with two very capable fists and a wicked roundhouse kick, which she’ll need when she attempts to escape from prison to find and reunite her shattered family.
Tristan is the son of the President and a sun dweller, and is forced to carry out the whims of his father without question.  When his mother disappears, Tristan seeks to leave the Sun Realm forever, in pursuit of his destiny.
Will fate bring them together or will the dark and grim world they live in push them farther and farther apart?  One thing is certain: In their world, someone must die.

Dale: OK, now tell us something about Adele and Tristan that we *don't* know...something that's not in the book.

David: I love it!  Well, Adele is actually named after my wife, Adele, who is also a strong woman with good instincts and an amazing sense of right and wrong.  Although the Adele in the book—who is black-haired and pale (from living underground)—looks nothing like my wife—who is blond and tan (from our life at the beach), they are alike in spirit.

With Tristan I wanted to create a character who renews peoples’ faith in government leaders.  So many people, myself included at times, have become disenchanted with politicians, who seem to be bred for their roles, rather than earning them.  Tristan breaks the mold by thinking for himself and always striving to do the right thing.

Dale: Where do you get your inspiration to write?

David: In the back of my mind, I always had this crazy notion that someday I would write books for a living, but I always found some excuse not to write.  I moved to Sydney two and a half years ago for work and met my wife, who helped convince me to start writing in late 2010.  Now she can’t get me to stop!
So I’m pretty much obsessed with writing now and recently began doing it full time.  I published my first three books in October 2011 as a trilogy (The Evolution Trilogy: Angel Evolution, Demon Evolution, and Archangel Evolution).  I have loads of other projects at the moment too.

Once I started writing, I think I knew pretty much right away that it was what I wanted to do with my life.  It’s just who I am!  When I’m in the throes of a writing session (I mean like living, breathing, feeling the characters, the plot, the drama), it’s the most amazing feeling in the world for me.

My inspiration comes from all different places.  From the authors I look up to like Suzanne Collins, JK Rowling, and Veronica Roth, to music, to the little things you see in life as you’re walking down the street: inspiration is abundant in this world, so you always have to be ready to grab it and embrace it.

Dale: What's the first book you read that made you catch your breath?
David: The Lord of the Rings.  Poignant, breathtaking, epic: Tolkien’s Middle Earth is everything I want my own books to be.

David: I already have one, it’s called OCD haha!  I recently did a guest post at The Reading Angel where I explained why my OCD is my superpower.  But if I could have another superpower, it would be to be able to fly.  It’s always been a dream of mine and I love the feeling of flying through the air.  I’ve been able to get a temporary fix by riding rollercoasters and jumping out of planes, but oh how incredible it would be to really fly!

David: A dog.  What a life, I mean really!  Chasing sticks, pouncing, laying around, getting your head rubbed daily: what more is there?
(Dale: Not to mention that someone always cleans up your poop.)

David: When I was still working full time I listened to music as I wrote on the ferry to and from work.  I’d listen to anything from country (Keith Urban and Rascal Flatts) to alternative rock (Chili Peppers and Weezer) to Coldplay, Metallica and Matchbox Twenty.

However, now that I’m a full time author, I usually find a nice quiet place where my imagination can run wild, and I don’t usually listen to music.
(Dale: Some good tunes in that list!)

Dale: Is there a little of yourself in any of your characters? If so, who?

David: All of them I think.  Any emotions I imbue in my characters comes from within myself, so if they are really angry or really sad or really happy, I try to think of a time when I was that way and write the emotions that way.  In terms of character traits, I think I’m similar to Tristan in terms of his desire to do what’s fair and equal.  My father taught me the importance of equality in everything that you do.  I’m also a bit like Adele, in that I’m very sarcastic and think crazy thoughts a lot.

Dale: What process do you use to create your worlds?

David: Great question, but for me it’s a funny one, because I don’t really have much of a process!  I’m a bit of a run and gun author, wherein I get a very basic idea in my head of a plot for a book and then just sit down and start writing.  Once I get the creative juices flowing, heaps of ideas come to me and I just start jotting them down and piecing them together.  I’ve tried outlining without much success, so I’ll just stick to the plug and play technique!

Dale: What inspired The Dwellers series?

David: Another awesome question!  When I fell in love with dystopian novels a year or so ago, I started thinking about writing one.  I thought about all the great dystopian novels I had read and came up with a list of what elements they had in them, and what had already been done in terms of setting and political climate.  I wanted mine to be different and unique, but still fit nicely within the genre.  I realized that most dystopians take place on earth and everything has been changed.  So I thought it would be cool to have everything take place underground, which would make my novel quite different and give me plenty of challenges in creating a world where people have never even seen the sun or the moon or the stars.  A world without rain or wind or flowers or trees.  Once I had the idea, I just started building my world from the bottom up.  What forced humans underground? What changes would occur once they moved underground?  How would politics change?  I LOVED the process of creating this world from scratch developing a backstory to it all, and creating characters within all the turmoil.  I almost feel selfish, like I got to have all the fun creating and my readers only get to read the finished product!

a. Beach or mountains?  Both!  Hawaii is the ultimate in both worlds, but if I have to choose just one I’d go with beach every time.
(Dale: (a) Did you just cheat on that answer? Haha, just kidding. (b) Totally jealous that you’re in Hawaii.)

b. Summer or winter? Summer!  My wife, Adele, and I are travelling around the world for the next two years, chasing the sun.

c. White or dark chocolate?  Dark for sure!  The more bitter the better for me.
(Dale: I was with you until you said ‘bitter’.)

d. Coffee or tea? Prefer coffee but I drink both from time to time, although I’m not someone that requires either on a daily basis.

i. What was the last thing you ate? Just finished a bowl of Honey Nut Cheerios

k. Boxers or briefs? Boxers for sure, and you’ll never catch me in a Speedo!

David: A special thanks to Dale for giving me (and my wackiness) the chance to come on her blog for this interview.  I hope you all get the chance to read The Moon Dwellers, which is now available everywhere ebooks are sold or in print via Amazon.com (links below).  Also, I pledged when I started writing to always respond to my readers, and I love getting comments and questions, so please contact me using one of my favorite social networking sites below.  As always, happy reading!!
Where you can find me hanging out:
My blog/website: http://davidestesbooks.blogspot.com
My Facebook page/s:http://www.facebook.com/pages/David-Estes/130852990343920
My Goodreads author page: http://www.goodreads.com/davidestesbooks
Twitter: https://twitter.com/#!/davidestesbooks
David Estes
Author of The Evolution Trilogy and The Dwellers Saga

It’s Dale again. Thanks David for sitting in the hot seat this week! I enjoyed learning more about your inner weirdness. If you want to check out The Moon Dwellers, here are the deets.