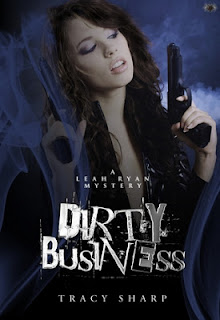 Summary:
Pregnant women are disappearing in the capital region. The mother of Alexia Clemmons, one of the missing women, hires private investigator Leah Ryan and partner Jackson Quick to find her daughter.

The list of suspects include Alexia’s philandering husband, who hardly seems broken up about his pregnant wife’s disappearance, a cult leader who purposely impregnates his female followers whose babies suddenly vanish, and a shady network of adoption agencies whose involvement in a black market baby scheme has ruined many lives. Taking this case leads Jack and Leah into a labyrinth of mystery and murder.

Complicating matters is Leah’s intense sexual attraction to Lucas Novak, the married expert in violence and threat assessment whose expertise they’ve enlisted. Turning to Lucas in search of oblivion leads to a series of risky, addictive encounters between them, endangering Leah emotionally and physically as her focus on the case wavers.

My thoughts:
First, even though this is 3rd in a series, you totally can pick up this book as a stand-alone. I did. You don't need to read the others to take a seat on this fun train.

Her best friend and business partner, Jack, is strong, sexy, and smart. He's every girl's fantasy for a best guy friend. He's a  loyal friend who'd do anything for Leah, with no pressure for being good or perfect or putting out. And while he doesn't approve of the naughty things Leah has a tendency to do, he doesn't judge her. I want a Jack! Give me a Jack. Please.

The characters are well-developed and three-dimensional. Even the sub-characters have, well, character.

The plot, however, seemed to go in too many different directions at times. And while these little veins in the story did eventually lead to the heart, I thought it would be a little more cohesive than it was. Some things seemed just a little coincidental, to me.

Some scene conclusions didn't seem quite realistic...characters buying explanations that didn't seem legit. But those were few and far between, so I'll let that one go.

I usually don't comment on editing errors, but this book had quite a few typos. Oops. But ya know, it didn't detract from the story for me, because the writing was otherwise excellent. I found myself being very forgiving.

And one thing that bugged me. It seemed like Jack did all the leg-work in investigating. Leah would either be sleeping or having sex, and come back to the office and Jack would be ready to go with new information and Leah would jump in and do the physical side (with Jack, of course). Didn't seem like an equal partnership, but maybe that's just how this team rolls. Maybe those dynamics are set up more fully in the earlier books. And granted, the 2nd half of the book Leah was quite sick, so maybe we can make some excuses here.

Anyhoo, if you like sexy crime drama, this is a very good read.
Posted by Unknown at 10:40 AM

I'm glad you enjoyed it overall! Some of the things with Jack and Leah that bothered you were dealt with in earlier books--she's just not as good with the legwork and he's exceptional at it--so I do encourage you to read them all. Tracy Sharp has written a couple other books, too, that are really outstanding. Her latest YA novella (came out around Halloween '12), Spooked is awesome, but ends on a bit of a cliffhanger. I mean, the main bit of the story is wrapped up, but it is obvious that sequels are planned. Anyway, I love her writing and I'm glad you enjoyed it, too :-)

Overall I did quite enjoy it, and I figured there were dynamics to that relationship that were explained in earlier books...I will probably go back and read the earlier books!