Book Review: Under the Never Sky, by Veronica Rossi

Under the Never Sky
Veronica Rossi 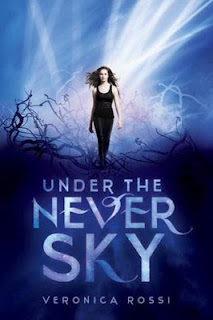 OK, I was uber-busy this weekend and didn't have time to post my review, but let me just say this was a pretty awesome book. Loved it.

Summary (from Goodreads):
EXILED from her safe home in the enclosed city of Reverie, Aria finds herself in the outer wastelands known as the Death Shop. If the cannibals don’t get her, the violent energy storms will. There she meets a savage, an Outsider named Perry – wild, dangerous – who is her only chance of survival.

But Perry needs Aria, too, and they are forced into an unlikely alliance that will determine the fate of all who live under the never sky.

My thoughts:
Another YA dystopian novel that really rocks the boat. You have fear, violence, secrets, betrayals and uber sexy guys. A perfect setting for a perfect (energy) storm (yeah, sorry, couldn't quite help myself with that little Never Sky joke).

Anyhoo, the start of this book is creepy. The guys are creepy, and you can just feel the tension under their daring foray into the off-limits dome, you just know something is up with these guys and it ain't gonna be pretty. It wasn't. It was scary. I was scared for Aria.

Then she's booted into the outside and meets Perry. What an angry character. He's originally portrayed as, well, savage, with wild, uncombed hair...but with a tendril of nice-guy-syndrome. And what happens to nice guys? They get nothing but trouble for their efforts. Yup. Perry's got some bad karma coming his way.

The plot moves forward *most* of the time, with enough twists to give you whiplash. I like me some twists. I like to say, "Dude, didn't see that coming!" There's a couple of nice moments just like that in this book.

The world is creative and the author paints some very vivid pictures. I could easily picture the energy storms. Not sure what created them, but liked them all the same.

The only negative thing I could say is that there's just a little something about the characters that kept them a tad remote. Aria doesn't like to be touched, and I'm not sure why. It may be the product of her upbringing in the dome where they spend a lot of time in the realms and not reality. Didn't quite get that. I also didn't quite get Perry's anger toward his brother. And I think I'd like to know a little more about his past that made him the person he is. Maybe that's coming in later books.

Yeah, later books that I will definitely be reading. Highly recommend this one if you're into YA dystopian.
Posted by Unknown at 8:36 AM