Book Review: Reaper of Sorrows, by James A. West

Reaper of Sorrows
James A. West 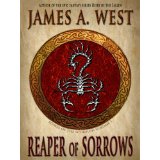 Summary:
In an age between the beginning of all creation and the end of all things, humanity knew the truths of sorcery and gods, steel and blood, courage and cowardice. During this forgotten age rises an evil that threatens to sunder the laws governing life and death….

Known as the Scorpion, Rathe Lahkurin is the greatest and most beloved warrior in the kingdom of Cerrikoth, but a jealous rival is plotting his fall from grace….

Deep within a lightless catacomb an aged mystic is entombed behind a wall of flowing blood, and in another tomb an undying maiden burns, all so that an embittered conspirator can gain black powers and take his revenge….

At a remote fortress reserved for the kingdom’s vilest outcasts, buried deep within a sinister forest rife with foul creatures, villagers are vanishing. Others are turning up dead….

Soon the threads of fate will entangle the Scorpion in a plot darker than any nightmare, a trap that threatens not only his life, but his eternal soul.…

Okay, you have our warrior guy, Rathe, who doesn't just like killing, maiming, raping and pillaging, even though, good warrior dude that he is, it's expected and as a captain, he's expected to tolerate and allow it. But Rathe wants more in life, he wants purpose, he wants to do right, he wants deeper meaning to life.

Good, right? Not in this story. Oh no. There are jealous wankers, and evil little monkeys (no, not literal monkeys, you dweeb) who throw monkey-wrench (yeah, see how I did that) after monkey-wrench at  poor Rathe's feet, ankles, knees, head, you name it.

This is non-stop action, full of men, and fighting, and evil, and magic, and betrayal, and lust, and twists...good golly, this book has everything but the kitchen sink.

The writing is spot on, solid. Characters are well-drawn with depth. Plot is hole-less. Very well done book.
Posted by Unknown at 9:07 PM