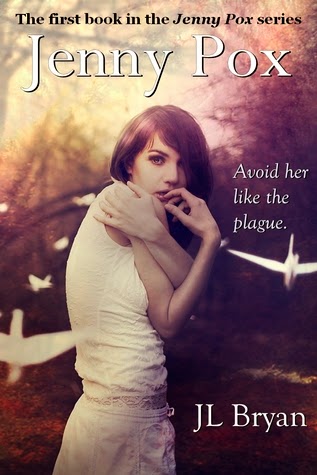 Initial Thoughts: Ew and Ick and Good!
Summary:
Eighteen-year-old Jenny Morton has a horrific secret: her touch spreads a deadly supernatural plague, the "Jenny pox." She lives by a single rule: Never touch anyone. A lifetime of avoiding any physical contact with others has made her isolated and painfully lonely in her small rural town.

Then she meets the one boy she can touch. Jenny feels herself falling for Seth...but if she's going to be with him, Jenny must learn to use the deadly pox inside her to confront his ruthless and manipulative girlfriend Ashleigh, who secretly wields the most dangerous power of all.

Not recommended for readers under eighteen.

My Thoughts:
First, not sure why the warning label...I certainly think any kid 14 and older who loves horror can handle this book.

So, let's get down to business. Characters. You have the good, the bad, and the ugly. Truly well developed characters. Ashleigh is so wickedly evil you just have to love that character. She's a brilliant master-mind and a master manipulator. Of course, she has a little help with her paranormal ability, but damn, the girl knows how to use it.

On the other hand, you have Jenny, who has done everything in her life to dial back her powers because, ya know, they're deadly. And she doesn't just pass on the plague...she is the plague. I mean, super gross! I have to give Seth kudos for over-looking that one kinda major gross thing. Ew and ick! It gave me chills just reading it. And that, my friends, makes the book yummy.

All the manipulating is so painfully well-written. There was a time or 2 I had to set the book aside, just to take a moment, because I could feel Jenny's pain and humiliation. Really good, my pretties.

All of the events in the book simmer gently, slowly boiling to a blow-out explosion in the end that I didn't see coming.
Posted by Unknown at 7:07 AM